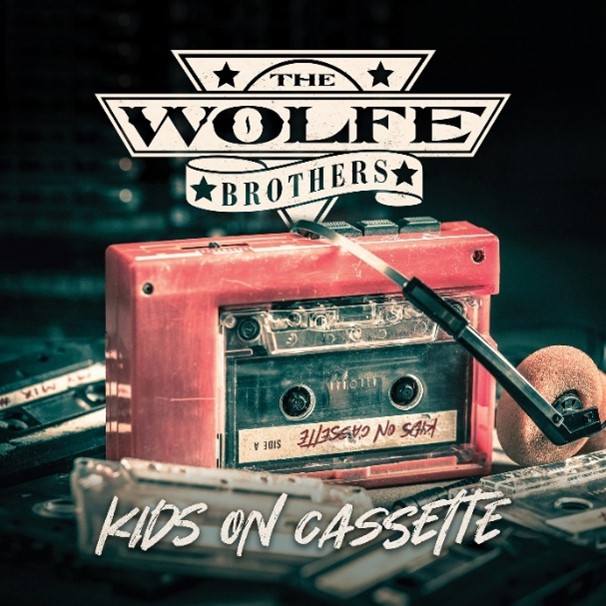 The title track of The Wolfe Brothers new album, Kids On Cassette, was always going to be a special single release. Embodying the soul of the album and taking the listener back to the retro heart of where the brothers first started their musical journey, the Tasmanian duo have created a trip through time with the video clip of the single. Watching the clip, filmed on-location on The Wolfe Brothers’ Berry Farm in Southern Tasmania, viewers will have flashbacks to their own childhoods, it invokes memories of lazy days exploring and innocent fun.

For Nick and Tom Wolfe, the clip was a real exploration of their own childhood. “Kids On Cassette is all about that amazing feeling of being a kid, when everything seemed bigger and it felt like the summer holidays lasted forever,” says Nick. “Tom and I are so grateful to have grown-up where we did as country kids, and in this video, we tried to capture a day in our childhood. Exploring, learning, getting into strife, and of course, playing music with our mates.”

The video featured two young actors from Tasmania – who themselves are actual brothers – playing younger versions of Nick and Tom. The clip was filmed where The Wolfe Brothers would ‘knock around’ as kids. “To watch the brothers play us was amazing,” says Nick. “I think their personalities really reflected ours, I could see a lot of similarities between us – a couple of country kids who make their own home movies and recordings and write songs and jam. Really, we could not have found a more matched pair! To watch the kids all jamming in the old fruit pickers hut where we used to 20-years ago was actually uncanny. It was like stepping into a time machine. Seeing the kids jamming out at a band practice really brings a smile to my face. I remember being in that very room, rocking out with our mates, all just totally high of the joy of music, long before any thoughts of business or careers ever entered our heads.”

Written with Erik Dylan (Kip Moore, Luke Combs, Eric Paslay, Eli Young Band), the brothers also wrote the track Ain’t Seen It Yet from the album with the Nashville songwriter. The Wolfe Brothers consider him one of the best lyricists in the world. Kids On Cassette was recorded between MCC Recording Studio in Calgary, Canada and Love Hertz Studio, in Sydney. It was produced between Nick Wolfe, Matt Fell and Johnny Gasparic.

Kids On Cassette was one of the first tracks that The Wolfe Brothers wrote for their latest album, and they instantly knew they wanted the track to be a key single and set the tone for the record. “As we all know vinyl has made a huge comeback in recent years, but much of the soundtrack of when we were kids was on tape,” says Nick. “We had Walkmans and boomboxes as kids and cassette players in our first cars. We’d play those things till they got chewed up and we’d have to pull them out and try to salvage them by winding them up with a pencil. So much of the music that we absorbed into our DNA and shaped us as musicians came from cassettes.”

The song is also a bit of a call to arms from The Wolfe Brothers to the next generation, and they hope kids take something away from watching the video. “Don’t ever truly grow up,” says Nick. “Always keep a little bit of that ‘kid jamming in the garage’ spirit, and if you’re lucky enough to do it for a living one day, that’ll help you remember why, and help you get through the challenges.”