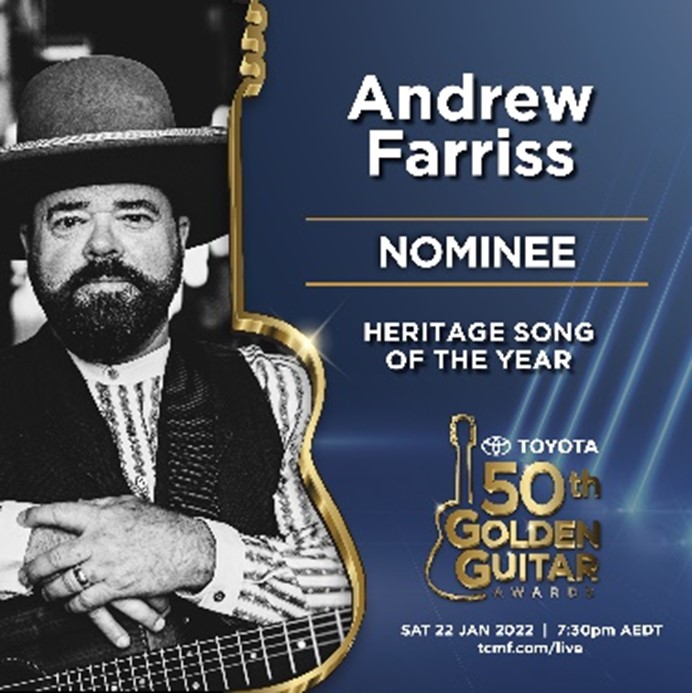 Sharing music from the release of his debut country solo album at the Tamworth Country Music Festival, Andrew Farriss now has lots more to celebrate with a nomination in the 2022 Golden Guitar awards for Heritage Song Of The Year. The track that earned the nomination, the gun-slinging With The Kelly Gang paints a vivid picture of Australian history.

Releasing With The Kelly Gang to radio in the lead-up to the 2022 Tamworth Country Music Festival, the song is an important part of the new musical direction that Andrew is heading in. When he was writing and recording his self-titled solo album, he knew from the start that he wanted to tell the story of an Australian outlaw, to bring the album full circle from its tales of international cultural spirituality, back to home.

Penning the track with Mark and Jay O’Shea in Nashville, it was a defining moment. With The Kelly Gang solidified the direction Andrew wanted to take his release as a songsmith. It also resonated with him, particularly as someone who has lived and worked long-term on the land.

Andrew specifically chose to keep the instrumentation in the song ‘old-school’, using acoustic instruments, Irish flute, harmonica and mandolin, instead of loops, samples and drum machines, to enhance the historic feel of the track. The result is a song that centres the listener in a place and time, contemplating another side of an infamous outlaw. 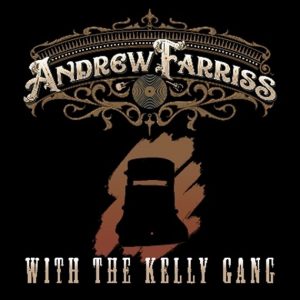 “The legend of Ned Kelly and his gang has fascinated generations,” says Andrew. “I’ve always been interested in Australia’s history, and I’ve since learned both sides of the Ned Kelly story. This song captures a moment of Australian culture that felt right with the outlaw theme of my album, and I really enjoyed writing it with Mark and Jay O’Shea.”

Performing at Tamworth Country Music Festival, Andrew will be showcasing material from his self-titled album, as well as his previously released solo EP Love Makes The World. He is taking an all-star band with him and also alludes that there may be a special guest or two making an appearance. Andrew’s band features Lawrie Minson (on steel and banjo), Travis New (on lead guitar), Ashleigh Leef (on backing vocals), Timothy Sampson (on bass) and Mitch Farmer (on drums).

Andrew Farriss AM is considered one of the world’s most revered songwriters. He has written, produced and performed music across the globe, with artists such as Yothu Yindi, Tom Jones, Alison Porter, Tania Kernaghan and Jenny Morris. With his band INXS, he received three Grammy-award nominations, 10 Australian Top 10 singles and seven U.S. Top 10 singles.

Andrew’s new single With The Kelly Gang is released to radio on Monday 29th November 2021. Andrew’s debut self-titled solo album, and Love Makes The World EP are out now. 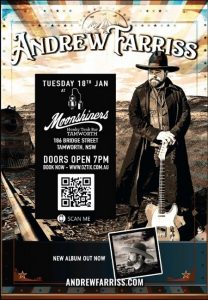