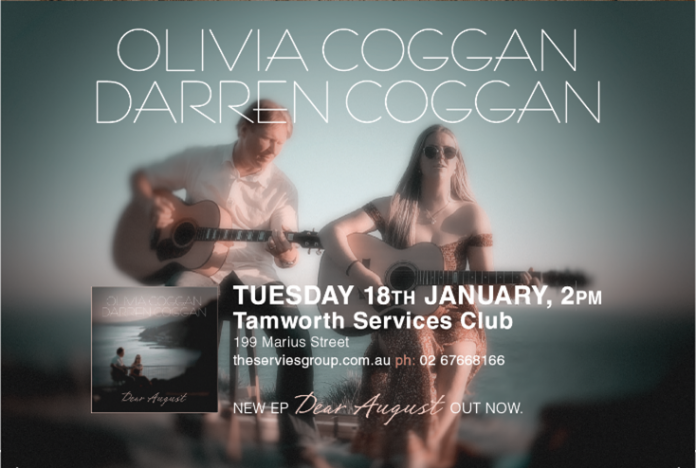 Award-winning performer Darren Coggan and his 17-year-old daughter Olivia Coggan took the challenge of home learning during the 2021 lockdown a step further, and recorded a joint EP. The seven-track Dear August, features uplifting affirmations of the universal values they hold true. Now, for the first time, father and daughter will be officially performing together at the 2022 Tamworth Country Music Festival and it will be a celebration. While this isn’t the first time the two have shared the stage together for a song, their show at Tamworth Services Club will be their first of many co-headline appearances.

Darren says he is looking forward to sharing the stage with his daughter. “We will be performing together all of the songs from the EP, as well as some of the other songs that we have loved singing together over recent years,” he says. “I will be performing a selection of songs from my other albums and concept shows that I have produced, and Olivia will also showcase some of her original songs that she has been writing over the past year. Olivia has really taken to writing this year, which has thrilled me to no end, and I may obviously be a little biased, but they are really great songs and I think the audience will thoroughly enjoy the journey we take them on. The show will be heart-warming, positive, full of love, and it will be great to celebrate this milestone 50th festival at Tamworth with such a special show.”

No stranger to performing at Tamworth, Darren has been bringing his family along to the festival every year. “Both of our kids, Olivia and her older brother Gabe, have grown up being backstage in the theatres at my concerts since they were babies,” he says. “I have often welcomed Olivia on stage to sing a song with me during my shows. It’s always been something that has felt natural for us to do.”

When it came to being locked down for months and remote learning, Darren and Olivia took those performances to the next level by recording their own EP. “Dear August was a result of us trying to stay positive and productive during the endless months of lockdown that we found ourselves in this year,” says Darren. “I am actually very grateful for all of the quality time we had together to make this EP, there was no time limit, no urgency to get it completed, it was literally something to look forward to each day, singing songs and playing music. I guess it was my version of ‘home schooling’. The recording started out just as a way of archiving songs that we have sung together over the years at our family gatherings and sing-a-longs, we had no idea that it would naturally grow into something as grand as it has. As we began recording the songs in my home studio, it all started feeling quite special, so I sent what we had captured to my great friend, and incredible musician-producer, Ben Edgar, who has worked with artists like Missy Higgins, Passenger, Angus & Julia Stone, and Vika & Linda Bull. Ben loved what we were doing and offered to contribute some further instrumentation. When we heard the finished mixes, we were blown away with the results, and I remember saying to Olivia, ‘I think we should release this for real, not just for our family, but for everyone to enjoy’. It all came from such a beautiful place and had a real warmth and sense of positivity to it. It is undoubtedly the recording I am most proud of in my career.”

Darren is a masterful storyteller who is considered one of Australia’s most exciting and diverse artists. He has carved an impressive career in the Australian country music industry with a swag of Golden Guitars under his belt. He kicked off his career winning the coveted Toyota Star Maker in 1996 and hasn’t looked back. Darren is equally at home in musicals and on screen, currently presenting the lifestyle TV program Sydney Weekender. Already, Olivia is establishing herself a career as a singer-songwriter to watch. As a student of the prestigious Talent Development Project, her performances have gained praise from industry heavyweights and she is currently working on her debut release, slated for 2022.