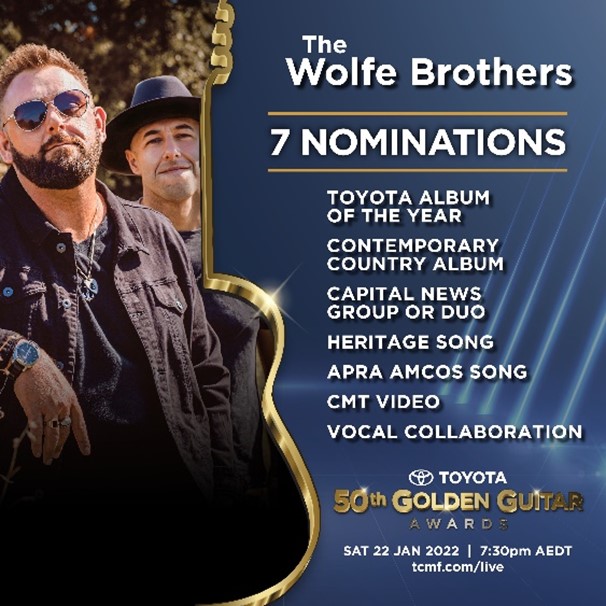 The Wolfe Brothers nostalgic fifth studio album Kids On Cassette has hit a chord with music fans around Australia, and now the 12-track release has garnered the duo an incredible seven nominations in the 2022 Golden Guitar awards. The album found its way rapidly into the hearts of country music fans, namely for the honest way that brothers Nick and Tom Wolfe approached the album, which embraces the music they grew up with.

The duo’s single, Startin’ Something, a collaboration featuring LOCASH, saw The Wolfe Brothers achieve their 15th consecutive #1 single on the day their album was released. Since then, they have racked up a 16th consecutive #1 single with the title track of the album, Kids On Cassette. All of the singles from the album – No Brakes, Anybody Ever, Startin’ Something and Kids On Cassette – have garnered acclaim from fans and critics alike. They currently have two songs in the Top 20 COUNTRYTOWN HOT 50 radio chart, with Startin’ Something at #12 and Kids on Cassette at #2. Kids On Cassette is still sitting at #5 on the ARIA Top 20 Australian Country Albums Chart, and #28 on the ARIA Top 40 Country Albums Chart. The Wolfe Brothers are one of the top played artists on Australian Country Radio in 2021, a pretty impressive title to have.

With all this under their belt, The Wolfe Brothers were already gearing up for a huge Tamworth Country Music Festival, celebrating their new album release with audiences in the region for the first time. Now, there are even more reasons to celebrate with seven nominations in the Golden Guitar awards. This brings the boys nomination tally up to 24. They celebrated with a big win at the 2019 awards, taking home four Golden Guitars. In 2022, the duo’s album Kids On Cassette has earned them nominations in Toyota Album of The Year and Contemporary Country Album of The Year, the title track also snagged a nod for AMCOS Song of The Year and CMT Video of The Year. Other tracks from the release also shined, such as the collaboration with LOCASH which earned them a nomination for Vocal Collaboration of The Year. In addition, Small Town Song, which was co-written with Andrew Farriss has been nominated for Heritage Song Of The Year. The Wolfe Brothers have also been nominated for Country Music Capital News Group or Duo of the Year. 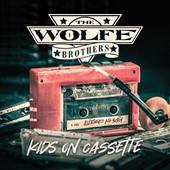 It is hard to believe the brothers not only finished recording their album in lockdown this year, but also released it to the world. Needless to say, gearing up for a week in Tamworth for the 50th anniversary festival in January will be something very special.

In honour of the Heritage Song Of The Year nomination, The Wolfe Brothers have dropped a surprise video for the nominated song Small Town Song. This one take, single shot video, was filmed in Texas, Queensland, 4385. Check out the video here: