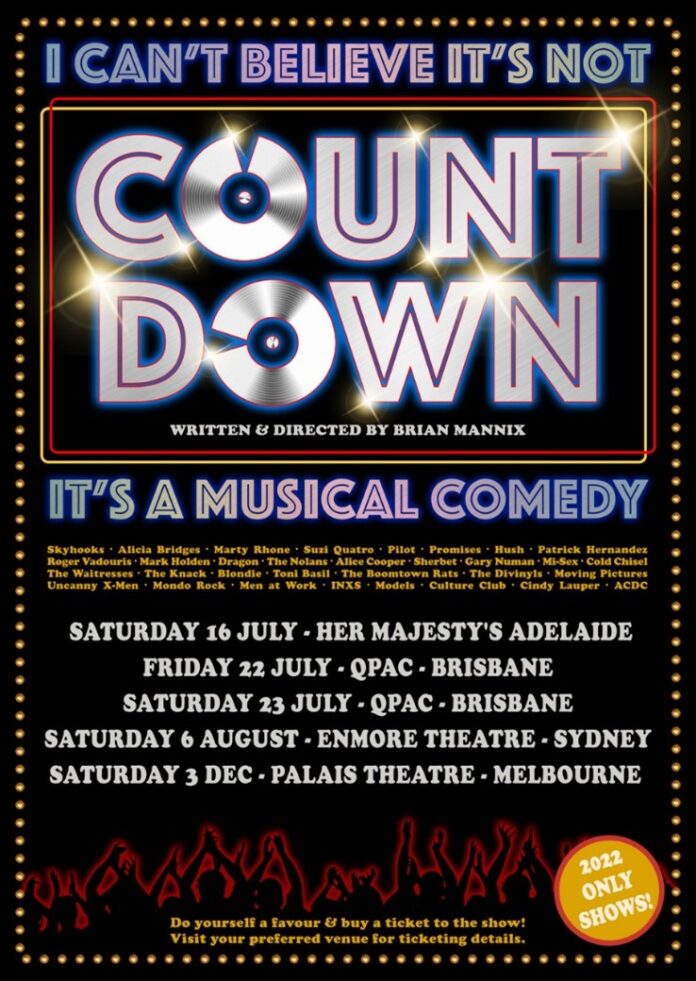 Written And Directed By Brian Mannix

After COVID forced the postponement of the original I Can’t Believe It’s Not Countdown tour dates, organisers are excited to confirm the musical comedy written and directed by Brian Mannix has been rescheduled. Kicking off in July this year, the light-hearted take on the legendary show Countdown will take audiences on a hilarious journey through some of the best music of the 70s and early 80s. What an era to be alive! It has been a decade since Uncanny X-Men frontman Brian Mannix took I Can’t Believe It’s Not Countdown – It’s A Musical Comedy on the road and the return is highly anticipated.

If there was ever a show remembered with such reverence, it is Countdown. The show is ingrained in Australian music history, and the antics of the bands performing have created a folklore of their own. Recalling memories of his own time on the show with his band, Brian was hit with an epiphany of sorts – the opportunity to recreate Countdown for the live stage, bringing in all the extremes and hilarity that often ensued, and of course, wrapping it around a killer soundtrack. The result was I Can’t Believe It’s Not Countdown which has sold-out every season the show has toured, since the first run in 1998 to the last performance in 2011.

I Can’t Believe It’s Not Countdown doesn’t just give audiences a musical experience, showcasing music from the likes of Skyhooks, Hush, Suzi Quatro, The Knack, Blondie, Uncanny X-Men, Mondo Rock and ACDC, to name a few, but it also gives an insight into what was going on backstage during the filming of the show. Theatre-goers are given a rare peek into the ups, downs, and everything in between – which is ample fodder for comedy – of getting bands on stage, and on-air.

“From the fashion, the acts and Molly, there was always going to be great opportunity for humour, and the songs were the soundtrack to our lives from 1974 to 1987,” says Brian. “That was what inspired me about the project, but the further I got into it, I realised it was much more than that. Countdown was a significant part of Australia’s culture, and history. It generated the most successful period in Australian music history. I think this show is a visual feast that takes people back to those times. It’s funny, it’s nostalgic, and it’s not only the soundtrack to a part of our lives, but the sounds of a brief period of Australian history.”

Much like the original television show it is based on, Brian says the musical has grown over the years. “The original show was informative, somewhat innovative and somewhat hilarious, especially when one views it in hindsight,” says Brian. “The show was constantly evolving, and the behind-the-scenes stuff has increased in latter productions. This is in part because the cast are so funny, I try to give them more to do besides singing. It’s not just a balance of what Countdown was, but a balance of what works best in theatre. I think we have it about right, but we will no doubt keep adding and subtracting stuff. That’s part of the fun and keeps the show fresh.”

Despite writing and directing the musical, Brian doesn’t play himself when the Uncanny X-Men perform, Instead, acclaimed theatrical performer Richard Macionis reprises his role as Brian again. Richard has only fond memories of touring with I Can’t Believe It’s Not Countdown. “It’s such a fun show,” he says. “The music – the madness of Countdown! But mostly, it’s seeing the faces and hearing the joy of the people in the room, as song after song, takes them back to special memories… their first disco, their first pash… Sunday evening sitting in front of the tele with family eating pizza subs, and reliving the popstar crushes they had, with the pop stars who are again on stage in front of them.”

It is this reason that it makes it special for Richard, and the cast who take on the roles of some of the most iconic musicians in history. For Richard, watching Countdown every Sunday was a religion and it set him on a trajectory to become an entertainer. “I was an X-Manic,” he says. “That is, as a teenager, I was in the X-Man fan club and Brian Mannix was my idol. I had posters of Brian on my walls and would listen to the X-Men on my Walkman nightly as I went to sleep, imagining one day of being like Brian Mannix. Skip forward ten years to the first run of the show where I was asked to audition. I was completely starstruck seeing Brian on the audition panel, and then, I got the gig. It was surreal, but most of all, being taught how to play Brian by Brian himself, was mind-blowing for me. Just quietly, I’d been ready to play that part since I was a kid.”

I Can’t Believe It’s Not Countdown is a show that is indiscriminate of demographics – the age range of the audience sweeps from those who would have been avid Countdown viewers, to those who have only heard of the legend of Countdown.   “This show tugs at the rock n soul heartstrings, in a light-hearted, bop down memory lane kind of way,” says Richard. “There are those in the crowd that can recall seeing the magical Countdown moments authentically recreated, lovingly on stage, and then those – slightly younger – who can recall the music as the soundtrack of their youth.”

For Brian, Countdown will always be something special, and he hopes to share that with audiences. “Going on Countdown was a very big deal,” he says. “An appearance on that show could make an act very successful. It was also the only TV station where you could buy beer in the canteen!  So, do yourself a favour and check out I Can’t Believe It’s Not Countdown.”

Tickets for I Can’t Believe It’s Not Countdown – It’s A Musical Comedy are on sale now. Check your preferred venue for ticketing details. Tickets have been selling fast.