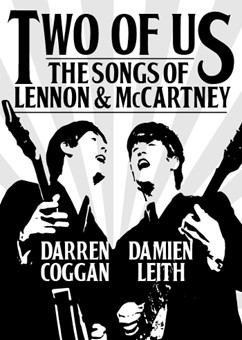 Two of Australia’s most prolific performers, Darren Coggan and Damien Leith, are back on stage with their revered tour dedicated to the most inspiring songwriters of all time, John Lennon and Paul McCartney. Two Of Us – The Songs Of Lennon & McCartney is a magical, intimate and acoustic portrait of the songs that changed the world. The songbook traverses immortal songs from The Beatles treasure trove of pop history, along with the richness and diversity of Lennon and McCartney’s solo careers.

Darren and Damien are well-placed to be paying homage to these iconic musicians, both have a long history of writing and performing, garnering acclaim from audiences throughout Australia. Over the years, their paths have crossed on the road many times, and they always bandied around the idea of one day touring together. It was a love of The Beatles that finally sparked them to seize the opportunity and the concept for Two Of Us was created.

To keep the songs true to how they would have sounded back when they were first penned, Darren and Damien keep it uncomplicated on stage, just a guitar, a piano and two voices.

“Damien and I were discussing how fabulous it would be to go back in time to 20 Forthlin Road in Liverpool and be a ‘fly on the wall’ witnessing the intuitive genius of John Lennon and Paul McCartney as they threw ideas back and forth writing their treasure trove of hits,” says Darren. “Imagine hearing those songs as they were first written? As a songwriter myself, I really enjoy the feeling of performing songs in their original form, there is something very honest and emotionally raw that seems to allow the songs to breathe. A great song will always be able to stand up on its own, just on a guitar, or a piano, and as we all know, the songbook of Lennon and McCartney is filled with such gems. It’s good to go back to the well and hear a song as it was born, without distraction of other production elements and sometimes they can take the listener on a whole new journey.”

For Damien, there has been something about The Beatles that has consistently inspired him throughout his career. He is finding from the small number of launch shows of Two Of Us that they have performed so far, that this feeling seems to be something that resonates with audiences too. “So many occasions in my life have a Beatles song associated in my memory,” Damien says. “Their melodies, their words, their song structures – it is absolute genius. The show so far has had an unbelievable response, we’re blown away by it. Darren and I both like to have a chat on stage, so not only are audiences hearing their favourite Beatles songs, but the show has a very personable feeing to it.”

The two-hour show is back-to-back hits – songs like Hey Jude, All You Need Is Love, Help, Imagine, Mull Of Kintyre, Eleanor Rigby, Let It Be, Jealous Guy, Beautiful Boy and Blackbird are just the tip of the iceberg. Darren says these songs are still as relevant to music fans today as when they were first penned. “The evolution of the Lennon and McCartney songbook, from their earliest compositions together, to their hits as solo artists, remain so durable because they broke their barriers between high and low art, and between musical genres,” he says. “Set against the backdrop of popular culture, the stories and the messages in these songs are timeless – their messages of peace and love are still so relevant in our world today, perhaps even more so. These songs were all written before I was born, but yet they still sound so fresh and infectious, they have become part of the fabric of our existence and the foundation of popular music as we know it today. The songs of Lennon and McCartney will out live us all.”

Damien Leith became a household name when he won Australian Idol in 2006. Since then he has made an indelible imprint on the Australian music scene as a prolific singer-songwriter, producer, author, playwright and TV personality. With multi-platinum selling albums under his belt and acclaimed sold-out tours paying homage to greats like Roy Orbison and Elvis Presley, Damien is one of the country’s most beloved performers. He is currently filming his first full-length feature film Just Ruby, and recently won an ACRA (Australian Commercial Radio Award) for the breakfast radio show he co-hosts.

Darren Coggan is one of Australia’s most exciting and diverse artists – a masterful storyteller who has carved an impressive career in the Australian country music industry with a swag of Golden Guitars under his belt. He kicked off his career winning the coveted Toyota Star Maker in 1996 and hasn’t looked back. Darren is equally at home in musicals and on screen, currently presenting the lifestyle TV program Sydney Weekender. He has received critical acclaim for his portrait of Cat Stevens which has seen him perform sold-out shows everywhere, including Sydney Opera House Concert Hall, Glasgow Concert Hall and Liverpool Philharmonic.

Tickets to Darren Coggan and Damien Leith’s Two Of Us – The Songs Of Lennon & McCartney are on sale now.