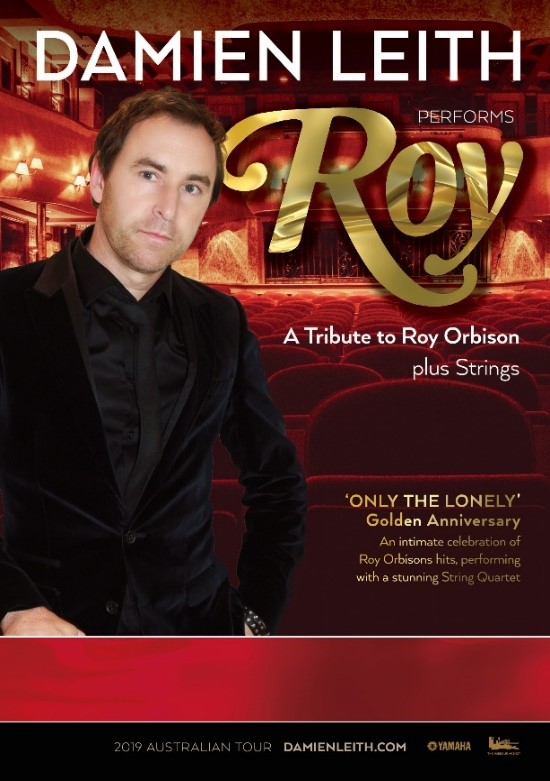 The year 2020 marks 50 years since the release of Only The Lonely, the classic Roy Orbison and Joe Melson hit song that still graces the airwaves today. With a nod to this onerous Golden anniversary, singer-songwriter Damien Leith is once again paying homage to his musical hero ROY, with a select run of dates celebrating his impressive legacy. ROY – A Tribute To Roy Orbison plus Strings will see Damien, arguably one of the finest voices in Australia, performing all his favourite classic hits arranged by celebrated composer Jessica Graham and accompanied by a sublime String Quartet in an unforgettable intimate setting.

This isn’t the first time Damien has created an ode to the legend behind songs such as Pretty Woman and You Got It, to name a few. His national show paying tribute to Roy has sold-out theatres throughout the past decade. Ever the consummate performer, Damien has always had a strong affinity with Roy Orbison’s music. He recorded and worked with the late Barbara Orbison and continues to write with legendary musicians in Nashville who worked with Roy throughout his career. In fact, when Damien released his album Roy – A Tribute To Roy Orbison it stayed in the ARIA Top 20 chart for 22 weeks and it was nominated for not only an ARIA award but also sold multi-platinum.

Damien received the highest praise imaginable upon the release of the album. Barbara Orbison extended her support by saying: “Damien, I applaud you for doing a Roy album. Thank you. We wish you every bit of luck and success. You got it.”

Further rave reviews for the album, and Damien’s homage to the late-great Roy Orbison came from his long-time songwriting partner Joe Melson. Joe, who penned Crying, Only The Lonely, Blue Bayou and Running Scared with Roy, said: “Very few voices excite me, but I fell in love with Damien’s voice when I heard it. His unique voice has inspired me to write again, much in the same way Roy Orbison’s voice inspired me to write. I believe Damien is going to be a big star. All the best to you, Damien. Looking forward to good things with you.”

For Damien Leith himself, Roy Orbison is still one of his biggest influences, and it shows in the care he takes when paying homage to the great man’s music on stage. “Roy was a stylus, he created his own unique sound which made him stand out over so many other artists,” says Damien. “His incredible voice, mixed with dramatic pop/opera melodies became his signature. Working with Barbara on my album Roy – A Tribute To Roy Orbison was amazing. It was incredible to have her support and confidence in me, especially in interpreting Roy’s songs and giving them my own stamp. Also, while recording that album I met with Joe Melson – who co-wrote Only The Lonely and Crying – and we have since become good friends and write together almost every week via Skype.”

Damien Leith first captured the hearts of the Australian public in the 2006 reality television show Australian Idol. Since then he has enjoyed platinum selling albums and multiple awards including ARIAs, MTV Australia Video Music Awards and Helpmann Awards. In addition to his incredible musical successes, he has also hosted and co-hosted multiple television shows, penned two novels, and continues to co-host a popular breakfast radio show, having just won an Australian Commercial Radio Award (ACRA). He has also recently filmed his first feature movie, which he wrote with his wife and stars in – Just Ruby will be released mid-2020.

Tickets to Damien Leith’s ROY – A Tribute To Roy Orbison with Strings are on sale now.