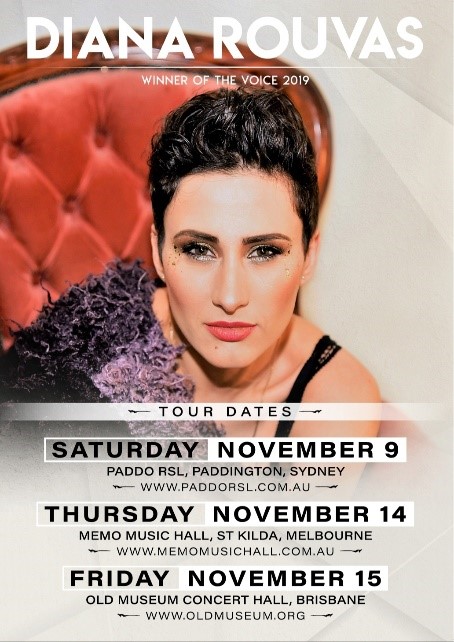 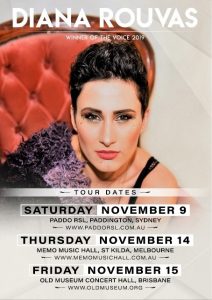 Winner of The Voice 2019, Diana Rouvas has added three more dates to her already sold-out winner’s run of shows, taking her Live show to Sydney, Melbourne and Brisbane this November. The magnificent vocalist won the hearts of music fans and judges alike this year with her powerful performances. This is a chance to for audiences to see the soulful spirit that took her straight through to the Grand Final and saw the songstress awarded with the top accolade of the acclaimed talent show.

Diana Rouvas is comfortable on the stage and it shows. She has been actively working in the music industry in Australia and overseas for the past two decades. She paid her dues on and off the stage before her well-deserved 2019 win. Her debut original single, Wait For No One, which was released on the show’s Grand Final night, is an ode to always going for your dreams, and that is exactly what this talented performer has done, since a very young age.

She was only four when Diana started vocal training. She comes from a musical family and made her onstage debut when she was only little. In fact, she was writing her own material by the time she was eight. When she was 16, she travelled to the United States to work on her songwriting skills and by the time she was 17, she was working as Tina Arena’s backing vocalist, touring internationally. She has become one on the most in-demand singers in the industry and has performed alongside some of the country’s most well-respected names.

One of the things that sets her apart, is that Diana is not just an incredible vocalist, but also a consummate songwriter. Her sound is an authentic as it is soulful. Her debut single is a testament to that. Audiences attending her Live shows will have the chance to experience these songs – and more, including some of her favourites from her time on The Voice. Throughout the years, many musicians have asked to record her music, but she has saved the songs for her forthcoming debut release.

In 2012, Diana made her first appearance on the first series of The Voice, one of eight contestants in Keith Urban’s team. Her return in 2019 to join Boy George’s team followed years of hard work for the Sydney-born performer. A self-confessed perfectionist, she has always lived and breathed music and she felt she was at the right time in her life. It certainly was the right thing to do, and music fans and critics alike can attest that Diana Rouvas is the epitome of what The Voice stands for – a true talent. When not on stage, Diana is currently working on material for her debut album to be released through EMI.

Tickets for Diana Rouvas ‘Live’ tour are on sale now. Diana’s debut single Wait For No One is out now via EMI.