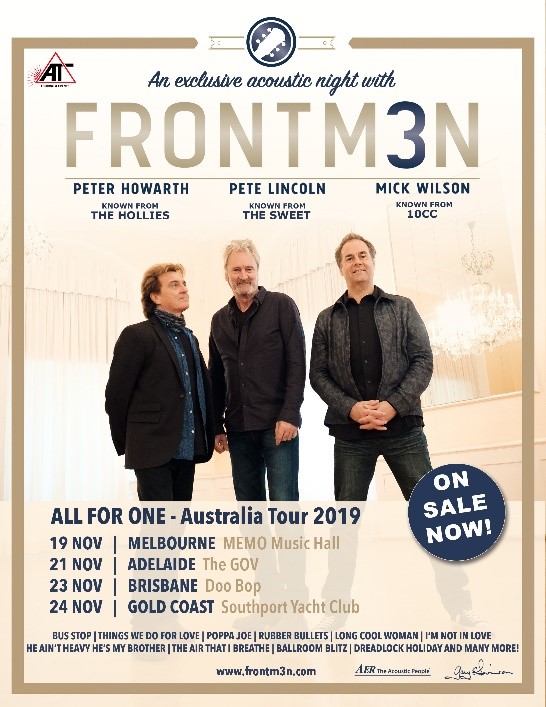 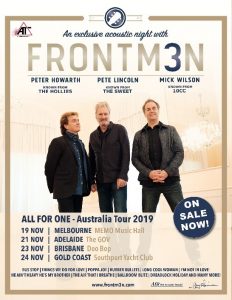 Three iconic frontmen – and great musical friends – have joined forces for an unforgettable tour, heading to Australia for a limited run of shows this November. Featuring Peter Howarth from The Hollies, Mick Wilson from 10cc and Pete Lincoln from The Sweet, Frontm3n is a show jam-packed with classic hits, three formidable frontmen with their guitars and their amazing voices.

The All For One tour is an intimate glimpse into the music – and behind the scenes – of these iconic bands. The acoustic concert features not only the great music from The Hollies, 10cc and The Sweet, but also great stories and humour of the musicians’ time on the road and in the studio. They’ve recently sold-out tours throughout Germany and Scandinavia; and received a huge nod of approval performing a coveted spot to millions from the Brandenburg Gate on German TV to welcome in the New Year in 2018.

Their most recent DVD release – Live In Berlin – hit #2 in Germany, sitting in the Top 30 for eight weeks, and achieved the #1 position in Amazon’s Music DVD Chart. At the end of last year, Frontm3n released an impressive double CD of original songs, including the singles All For One and Open Up, which were embraced by fans. The album also features some reworked recordings of familiar hits. The second CD was an insight into the warmth and intimacy of a Frontm3n live show, with fabulous acoustic arrangements of favourite tracks by the three bands.

It was back in the early 90s when Peter, Mick and Pete’s friendship first developed. They worked together in Sir Cliff Richard’s band and since then they have each shared the stage with many incredible performers, including the likes of Lionel Ritchie, Kylie Minogue, Cher, Tina Turner and Shakin’ Stevens to name a few. It is when they are on the stage together that they really shine.

The All For One tour features fresh acoustic interpretations of hit songs that have been on radio playlists for generations. Audiences will be taken through the musical journey of the three musicians, with songs such as The Hollies’ The Air That I Breathe and He Ain’t Heavy, to The Sweet’s Love Is Like Oxygen and Ballroom Blitz and 10cc’s I’m Not In Love and Dreadlock Holiday. There is even an unforgettable version of Cliff Richard’s classics Carrie and Move It. Other hit songs from artists such as Roy Orbison and Sailor are also part of the repertoire, as are some of Frontm3n’s original catalogue.

Tickets to Frontm3n’s Australian All For One tour are on sale now.