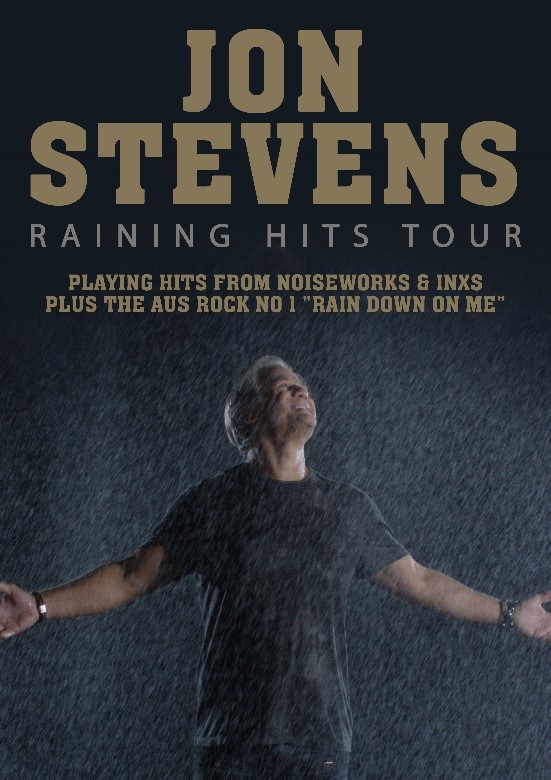 Plus, the iTunes Australian Rock No.1 Rain Down On Me

Kicking off what is set to be a massive 2019, Jon Stevens is back on the road with his aptly named Raining Hits tour, featuring not only all the greatest hits from his extensive back catalogue, but also the iTunes Australian Rock and Indie Rock #1 track Rain Down On Me. The tour, which runs through until April, features highly anticipated headline shows, special guests and festival appearances. Jon will rock out the hits from not only his solo career, but also Noiseworks and INXS.

With a back catalogue jam-packed with smash hits, and no shortage of great songs to choose from, the revered singer-songwriter is looking forward to reliving the different times of his musical journey, and sharing those experiences with audiences. With an extensive back catalogue of hit songs included in the setlist, the show is guaranteed to delight.

Jon Stevens hasn’t really stopped working – touring, writing or recording – since he first started out in the industry as a young musician. He really needs no introduction to Australian audiences; a revered singer-songwriter within his own right, he has fronted some of the most legendary Aussie bands – Noiseworks, INXS and Dead Daisies. His 2017 solo album Starlight brought his career full circle, showcasing an impressive musician whose songwriting nuance sets him on a musical pedestal as one of the best in the business today.

Launching his career back in his home of New Zealand as a teenager, Jon Stevens already had two #1 singles by the tender age of 16. Fast forward to the early 1980s and with five mates Noiseworks smashed onto the Australian airwaves with singles such as No Lies, Love Somebody, Take Me Back, Touch and In My Youth to name a few.  They were the embodiment of what Aussie rock was and should be – hard-hitting, talented and they put on a bloody good show. Never one to rest on his laurels, Jon Stevens didn’t stop working when Noiseworks when on hiatus. He followed up with solo albums, multiple stints in stage productions such as Jesus Christ Superstar and earned world-wide acclaim taking centre stage with INXS. His next band – The Dead Daisies – stepped up that international reputation with the debut single Lock and Load featuring the legendary Slash on guitar.

Get your tickets to Jon Stevens Raining Hits tour now.