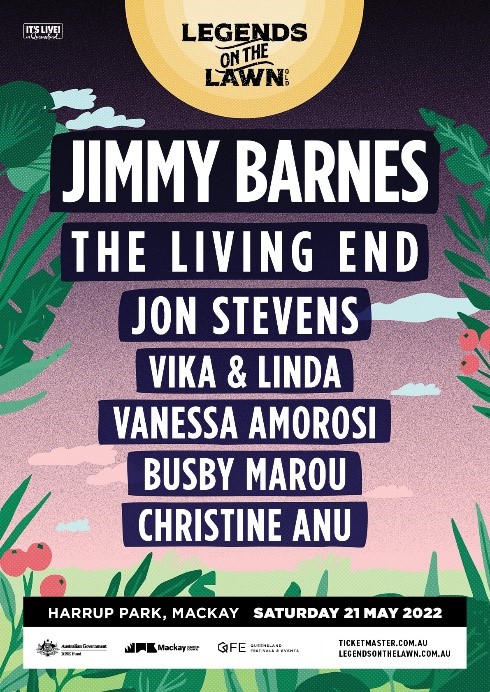 There is a new concert series launching in Mackay in May 2022 and it is going to rock. Legends on the Lawn brings some of the biggest names to North Queensland for one day of great music and if the inaugural line-up is anything to go by, audiences are in for a treat. Headlined by Jimmy Barnes, along with The Living End, Jon Stevens, Vika & Linda, Vanessa Amorosi, Busby Marou and Christine Anu, Legends on the Lawn is put together by the organisers who are responsible for the ever-popular Red Hot Summer Tour.

Mackay Mayor Greg Williamson said securing a live music event of this calibre is an outstanding win for the Mackay region and the state. “Mackay is ready to rock with Legends on the Lawn in May,” Mayor Williamson said. “To have big names like Jimmy Barnes, The Living End, and Jon Stevens performing in Mackay, is a tremendous result for our community and our economy. Anyone visiting Mackay will certainly get more than they bargained for with any number of our natural attractions and unique experiences on offer. I know a few of our most famous ‘things to do’, like platypus spotting, sharing a sunrise with kangaroos on the beach or exploring our pristine beaches will be popular.”

Jimmy Barnes, affectionately known by all as Barnesy, is the heart and soul of Australian rock and roll and released his 20th studio album Flesh and Blood in July 2021, which went straight to #1. He has 18 #1 albums under his belt, more than The Beatles, has sold more records in Australia than any other lock rock and roll artist, and for over 40 years, he has delivered some of our most intense and iconic live performances. He is truly in a league of his own. His third book, Killing Time: Short Stories from the Long Way Home, was released in 2020 and debuted at #1 on the non-fiction book charts, as did its predecessors, Working Class Boy and Working Class Man. Never one to slow down, Jimmy also has penned two books in 2021 – the recently released children’s book, Rosie the Rhinoceros, and a cookbook with his wife Jane titled Where the River Bends.

The Living End are considered Australian rock legends, and for good reason. Their blistering live performances have seen them perform far and wide, and their reputation precedes them, they rock from the first note to the last. When The Living End first smashed onto the scene in 1997 with their double-A single Prisoner of Society and Second Solution, they embraced a new Australian sound and fans and critics sat up and listened. Since then they have released seven studio albums, two of which have debuted at #1 on the ARIA Chart – four of those are Platinum and two are Gold. They have been nominated for an incredible 27 ARIA Awards.

After a sell-out tour in 2019, Jon Stevens returns to thrill audiences with the Noiseworks & INXS Collection, which pays homage to the bands that helped cement him as Aussie rock royalty. With a career that spans more than four decades, Jon has a swag of solo hits to his name, as well as songs which have become all-time favourites from his time with bands Noiseworks, INXS and the Dead Daisies. His performance will feature hit after hit and have punters on their feet from start to finish.

A powerhouse vocalist, Vanessa Amorosi became a household name with her debut single Have A Look in 1999. Her debut album smashed all records, hitting the Top 10 in several European countries, as well as #1 in Australia. Fast forward a decade, and Vanessa released her album Hazardous in 2009, achieving double-platinum sales and touring world-wide supporting the likes of Dave Stewart, KISS, INXS, Rob Thomas, Macy Gracy, Bryan Adams and Joe Cocker to name a few. In 2021, Vanessa launched her latest project, the soul-gospel influenced work Volume 1 and Volume 2 and now works and writes from Los Angeles.

Busby Marou are a Queensland favourite, and no strangers to performing in the region. Since they won the Most Promising New Talent at the Deadly Awards in 2010 for their self-titled debut album, Busby Marou haven’t stopped turning heads. Off the back of the strength of their debut EP, they shared the stage with Pete Murray, and supported James Blunt on his Australian tour in 2014. Their second studio album, Farewell Fitzroy, debuted at #5 on the ARIA Charts, and their third studio album, Postcards From The ShellHouse, – released in 2017 – debuted at #1. Their most recent album, The Great Divide, released in 2019 also saw them nominated for two Golden Guitars.

With 17 ARIA nominations to her name, Christine Anu is one of Australia’s most popular recording artists. Her 27-year career incorporates a broad range of achievements including music, theatre, dance, film, television, radio and children’s entertainment. Aside from platinum solo albums, she has appeared in Hollywood blockbusters, and performed in revered musicals such as Rent and Little Shop Of Horrors. Christine now presents her own radio show on ABC Radio every Friday and Saturday evening, and is a prominent voice of multicultural Australia. In 2020, her acclaimed album Stylin’ Up celebrated its 25th anniversary.

Organised in conjunction with Queensland Festivals and Events, and Regional Touring, promoters who have a strong affinity with regional Queensland, it is hoped the inaugural Legends On The Lawn will become a stalwart of the live music calendar in Mackay. Don’t miss this inaugural event in May.

Tickets for Legends on the Lawn go on sale at 10am QLD time on Thursday 24th February  through Ticketmaster. Tickets are only available through authorised ticket outlets listed. Patrons are advised not to purchase tickets from Viagogo or other Third Party Sellers, as fraudulent tickets will not be honoured.