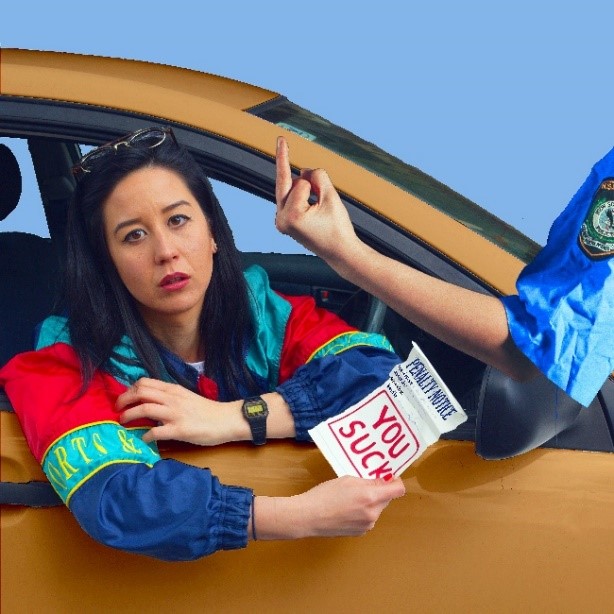 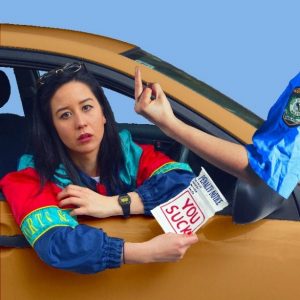 Comedian Nina Oyama has been living in the fast lane, in the literal sense, as the 13 speeding fines will attest and now, she’s slowing down to make her Comedy Festival debut in 2019 with her hilarious self-deprecating show Nina Oyama Needs A Lift. It was only five years ago that the then 20-year-old moved from the city to the country to start a new life, except instead of settling down she got heaps of speeding fines, lost her driver’s license four times and racked up a huge debt to the government. She also became a black-market taxi driver, delivered a cargo of drugs across the state line and fell in love – a culmination of experiences that makes for a comedy show jam-packed with laughs.

The wild autobiographical journey about trying to live life in the fast lane when you’re on your P-plates will see Nina take her comedy to the main stage for her first solo stand-up comedy hour. “I’m looking forward to debuting on the comedy festival circuit,” says Nina. ‘My style is pretty confessional and distinct, so I’m really excited to establish my voice amongst the other comedians. I’m also looking forward to playing to new audiences each night.”

The ‘self-referential’ show, jam-packed with anecdotes from Nina’s life of late, is about her move to the country, where she regularly had to drive a huge stretch of road that was always covered in police vehicles, and due to her lead-foot, she ended up with a bunch of speeding fines. “It’s like if you’re at a party and you meet a new person you get along with really well, and you start swapping these wild, crazy stories about when you were younger,” she says of her show. “My show is like hanging out but with good, structured jokes.Basically, the show kicks off with the first fine I got – which was nearly a thousand dollars for doing 40 km over the speed limit on Christmas (double demerits). I mean, that’s literally every possible mistake in the book, right?But for some stupid reason I didn’t learn from that – and I think that’s what the show is about – a person who continually makes the same mistakes and wonders what’s wrong with the world.”

The country town she moved to– Bathurst – ended up making an indelible impact on Nina, not only ending up inspiring her comedy, but she also fell a little bit in love with Central West New South Wales. She admits there was heaps of fodder for inspiration in the town, as well as some down-right great humorous adventures. “Bathurst is pretty famous for its car racing. My favourite story is about the fortnight before Race Week,when heaps of bogans from out of town go up the Mount Panorama Campground and bury all their alcohol in the dirt. Bathurst locals wait til they leave and then scour the Camp Ground with metal detectors, digging up all the buried booze. It’s pretty funny.”

When she wasn’t learning Bathurst folklore, Nina Oyama was packing a lot of comedy into her career – an impressive achievement for a comedian only just in her mid-20s. She has a wealth of comedic experience behind her, from starring in the ABC’s Logie award-winning program Utopia, to holding a regular slot on Tonightly with Tom Ballard. She was hand-picked to be part of the Melbourne International Comedy Festival’s Comedy Zone 2015 and was an ABC Freshblood Comedy Finalist in 2017. She was also part of the Just For Laughs at the Sydney Opera House in 2018. Recently, she earned acclaim for The Angus Project, a web series she co-created and starred in that aimed to smash the public perception of what its like to live with a disability.