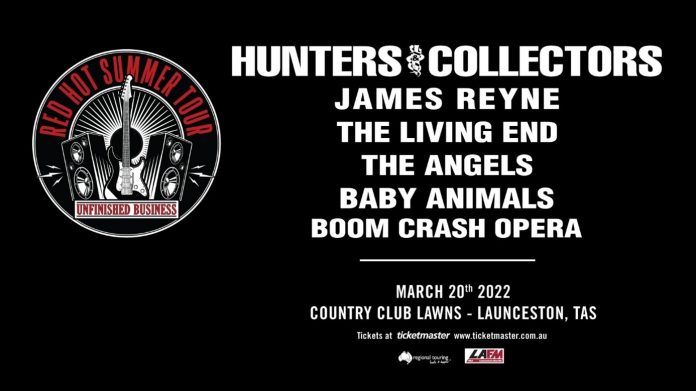 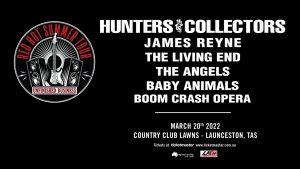 The organisers behind the RED HOT SUMMER TOUR are excited to announce the only Tasmanian show for the 2022 run in Launceston, scheduled for March 20. The highly anticipated Unfinished Business tour sees the return of the RED HOT SUMMER TOUR’s 10th anniversary line-up headlined by ARIA Hall of Fame inductees Hunters & Collectors, with special guests James Reyne, The Living End, The Angels, Baby Animals and Boom Crash Opera.

For Duane McDonald, who has been putting the final touches on the 2022 run across recent months, adding a date in for Tasmania was always on the cards. “We are thrilled to be able to add a Tasmanian show to the 2022 tour,” he says. “This will be the only show in Tasmania for 2022 for this run. We continue to be blown away by the support we have received from audiences. To everyone who has and continues to support us and the live music industry, you are the reason we do what we do and keep creating these memories. We can’t wait to see you in 2022.”

The Living End are considered Australian rock royalty, and for good reason. Their blistering live performances have seen them perform far and wide, and their reputation precedes them, they rock from the first note to the last. When The Living End first smashed onto the scene in 1997 with their double-A single Prisoner of Society and Second Solution, they embraced a new Australian sound and fans and critics sat up and listened. Since then, they have released seven studio albums, two of which have debuted at #1 on the ARIA Chart – four of those are Platinum and two are Gold. They have been nominated for an incredible 27 ARIA Awards.

The RED HOT SUMMER TOUR always sells out and the special Tasmanian show in March 2022 promises to be no different. Don’t miss this exciting show.

Tickets go on sale at 10am local time on Thursday 9th December 2021 via Ticketmaster. Tickets are only available through authorised ticket outlets listed. Patrons are advised not to purchase tickets from Viagogo or other Third Party Sellers, as fraudulent tickets will not be honoured.