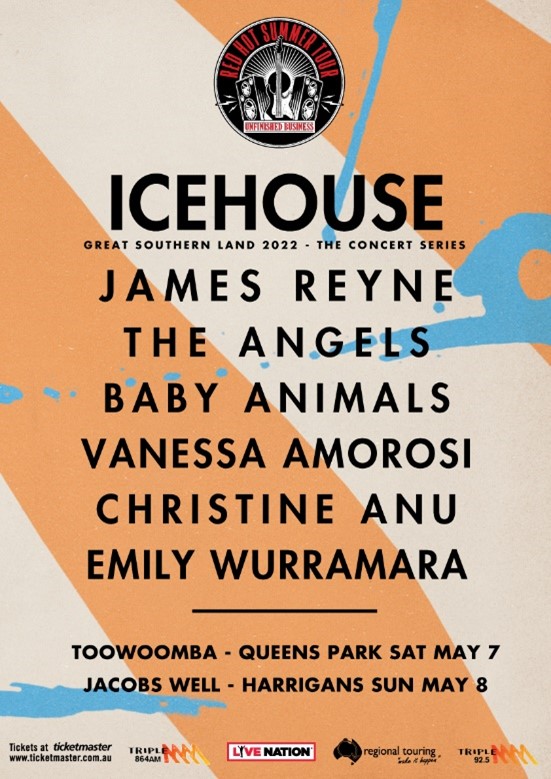 The RED HOT SUMMER TOUR is back in 2022 with two special Queensland shows celebrating the 40th anniversary of ICEHOUSE’s classic hit Great Southern Land. The highly anticipated shows, at long-time RED HOT SUMMER TOUR venues Queens Park in Toowoomba and Harrigans in Jacobs Well, will bring together a coveted line-up not only headlined by the iconic ICEHOUSE, but also featuring James Reyne, The Angels, Baby Animals, Vanessa Amorosi and Christine Anu.

Organisers are excited to bring these two special shows to Queensland in 2022. “We are thrilled to be able to bring this special line-up for the RED HOT SUMMER TOUR to two of our favourite locations in Queensland, while celebrating one of the biggest songs in Australian history,” says promoter Duane McDonald. “These concerts will create some incredible music memories and it is exciting to be part of this history making event. We continue to be blown away by the support we have received from audiences. To everyone who has and continues to support us and the live music industry, you are the reason we do what we do and keep creating these memories. We can’t wait to see you in 2022.”

Returning to the RED HOT SUMMER TOUR stage in 2022, ICEHOUSE are celebrating a special milestone, the 40th anniversary of Great Southern Land. Great Southern Land was first released in August 1982 as the lead single from ICEHOUSE’s multi-platinum second studio album, Primitive Man. The song debuted at #5 on the Australian Albums Chart and made its debut on triple j (2JJJ as it was known then). Great Southern Land has been a part of almost every Australian’s summer soundtrack for the past 40 years and in 2014, it was inducted into the National Film and Sound Archive’s Sounds of Australia registry. It’s also been remixed a number of times, most notably Bill Laswell’s The Great Southern Mix,  clocking in at almost 16 minutes, and the Byrralku Dhangudha remix from 1994 which features Indigenous musicians playing and singing the chorus in their own language. Its message is as current and relevant today as it was when it first appeared. The song has been the soundtrack to everything from discussions about Mabo and the impassioned theme to the Australian cricket team walking on the field, to having a plane named after it.

A powerhouse vocalist, Vanessa Amorosi became a household name with her debut single Have A Look in 1999. Her debut album smashed all records, hitting the Top 10 in several European countries, as well as #1 in Australia. Fast forward a decade, and Vanessa released her album Hazardous in 2009, achieving double-platinum sales and touring world-wide supporting the likes of Dave Stewart, KISS, INXS, Rob Thomas, Macy Gracy, Bryan Adams and Joe Cocker to name a few. Her 2019 album release coincided with her appearance on the RED HOT SUMMER TOUR to rave reviews. In 2021, Vanessa launched her latest project, the soul-gospel influenced work Volume 1 and Volume 2 and now works and writes from Los Angeles.

With 17 ARIA nominations to her name, Christine Anu is one of Australia’s most popular recording artists. Her illustrious career incorporates a broad range of achievements including music, theatre, dance, film, television, radio and children’s entertainment. Aside from platinum solo albums, she has appeared in Hollywood blockbusters, and performed in revered musicals such as Rent and Little Shop Of Horrors. Christine now presents her own radio show on ABC Radio every Friday and Saturday evening, and is a prominent voice of multicultural Australia. In 2020, her acclaimed album Stylin’ Up celebrated its 25th anniversary.

Emily Wurramara also joins the line-up of the RED HOT SUMMER TOUR. Emily is an AIR award-winner and ARIA nominated artist who performs in both English and her native Anindilyakwa languages. She is a six-time Queensland Music Award winner and is working on a new album, slated for release in 2022.

The RED HOT SUMMER TOUR has been selling out shows around the country for over a decade and its return to Queensland in 2022 promises to be no different. Don’t miss these very special shows.

Tickets go on sale at 10am local time on Tuesday 26th October 2021 via Ticketmaster. Tickets are only available through authorised ticket outlets listed. Patrons are advised not to purchase tickets from Viagogo or other Third Party Sellers, as fraudulent tickets will not be honoured.