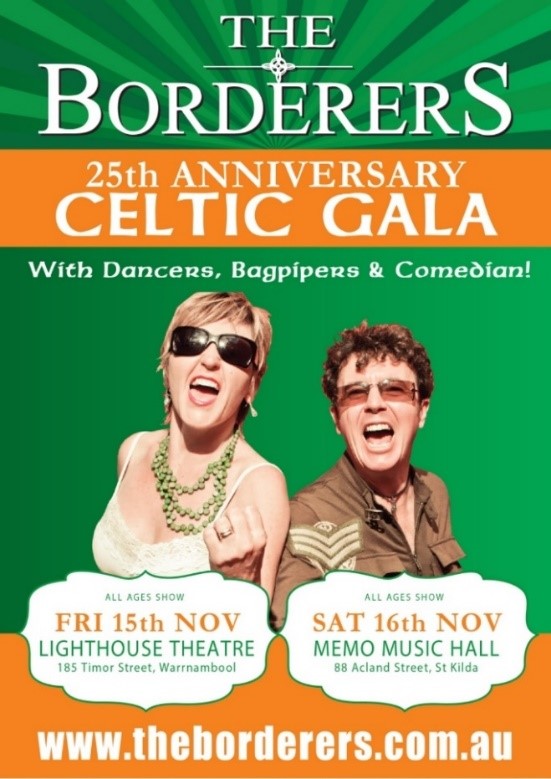 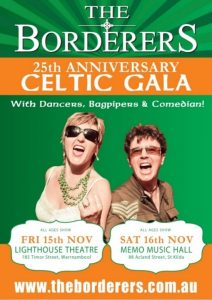 The BordererS are celebrating their milestone 25th anniversary with a massive Celtic Gala, and audiences in Victoria are invited. Announcing two special shows in Warrnambool and St Kilda this November, the Celtic fusion band will be bringing with them an unforgettable evening of entertainment that includes dancers, bagpipes and more! The band have been performing the show on festival stages, and selling out houses around the country, so audiences are certainly in for a treat.

Renowned for their high-energy live music, The BordererS – Jim and Alex Paterson – hark from Glasgow and Belfast respectively. An unlikely duo when they met – Alex was married with a toddler and Jim was a backpacker – they forged a strong musical chemistry and now celebrate their band’s silver jubilee. They are still bringing audiences to their feet at every show with their dynamic fusion of Celtic rock, zydeco, African, folk and gospel, to name a few.

For Jim, he says that he and Alex have more energy now on stage than when they started out back in 1994 and pack a huge amount into their three-hour show, including their acclaimed performance of The Proclaimers’ classic 500 Miles. The show promises to bring the party atmosphere to music fans.

“The audience can expect a very energetic and fun show,” he says. “A pipe band will start the evening off with Scotland The Brave and soon after we will grace the stage playing two sets, each with 13 high-energy songs, including some covers, highlights of our own music and Scottish classics. Mid-way through the first set, The Garrick Stewart School of Scottish Dancing will come to the dance floor to perform the sword dance to The Battle Song, followed up by a beautiful cover of Hallelujah. The energy will then go back into top gear again.”

The BordererS have recently returned from a whirlwind overseas tour, encompassing Canada, Europe, Russia and Japan. They are looking forward to getting back on home soil and playing to Aussie audiences again. “Australia is our home now, and the Victorian audiences always give us that extra bit more,” says Jim. “They’re more vocal and animated at concerts, which we love. It reminds us of performing in Scotland and Ireland. The weather doesn’t seem to bother Victorian audiences as much as other states, and they’ll definitely go and see a band whether it is rain or shine. Again, that’s the similarity to Celtic audiences in Europe.”

Celebrating 25 years, The BordererS have had a massive career to date. They’ve recorded with international soul singers, performed at WOMAD on the day that Princess Diana passed away, been part of some of the biggest Australian festivals such as BluesFest and Port Fairy Folk Festival, and performed overseas on the bill at events such as the Skagen Festival in Denmark. Looking back over the quarter of a century is a humbling experience for Alex and Jim.

“We now have fans who are 28, who came to see us at festivals with their mums and dads when they were three or four,” says Jim. “We always want to involve everyone at the shows, and never see ourselves above the audience. Alex and I love to chat to everyone before or after the concert, bring folk to the dressing room or sit and have drink with them at their table. The show is always about making it the best night ever for that crowd, so that they tell all of their friends. It’s a privilege to bring joy into people’s lives.”

The pair take the responsibility of their music seriously, and it is apt then that their forthcoming new single is about a cause that is close to their hearts. Slated for release on October 11 to coincide with Mental Health Week, The BordererS new song RAW explores suicide and depression in the music industry. This isn’t the first time they’ve focused their forces to raise awareness for Mental Health. Alex and Jim lost their son to suicide and have been continually striving to make a difference to others suffering in silence.

“The highs and lows of being a performer, and the consequent excessive drinking of drug taking that sometimes goes along with it can play a big part in a musician’s or actor’s life,” says Jim. “Our son was a musician, and it turns out that the music industry and the performing arts industry as a whole has the highest amount of people with depression, anxiety and suicidal tendencies. I wrote this new song RAW in a house in Port Arlington as we were headlining the festival there. I was finding it hard to even leave the house and face people. It’s funny how people just see the bright lights and the act on stage. We just want to raise awareness about the problem as everyone thinks musician’s, actor’s, sportspeople’s lives are so easy and rewarding. They are when you are on stage or playing cricket, or whatever… but you still have to deal with job insecurity, juggling many jobs other than playing your instrument…”

Tickets The BordererS 25th Anniversary Celtic Gala are on sale now. The BordererS new single, RAW, will be released on Friday 11th October 2019.