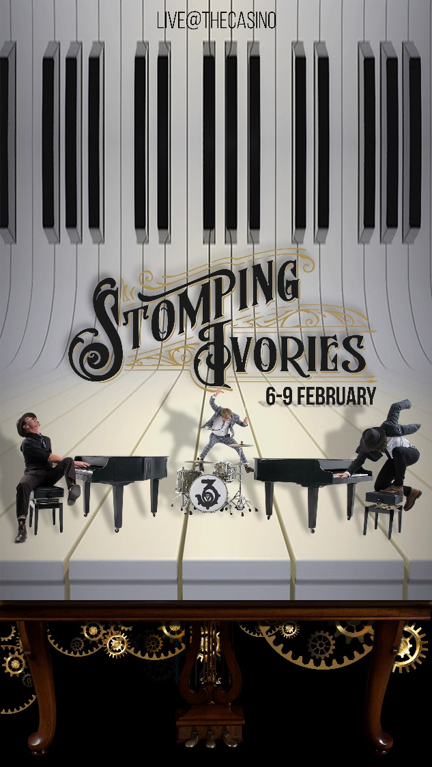 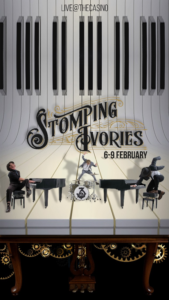 Music aficionados are in for a massive treat as the Stomping Ivories return to The Reef Hotel Casino to kick off the live music calendar for 2020 with four massive nights this February. Traversing a wide range of music from Gershwin to Gaga, the show features Hugh Scott-Murray and Greg Agar – both on keys and vocals – and Murray Sheridan – on drums and vocals and is a musical extravaganza from start to finish.

It’s hard to believe that it was a decade ago that Hugh Scott-Murray brought his ‘Duellin’ Pianos’ concept show to The Reef Hotel Casino for the first time and packed out the house. Stomping Ivories is the exciting revamp of that show, kicked up a dozen notches and switched into overdrive! Pulses will race, your hands will clap, toes will tap and these virtuoso musicians will smash out the classics, from honky tonk to rock, from swing to jive, and from pop to dance and beyond. There is nothing these world-class pianists and drummer can’t handle and it’s no surprise that they’ve been selling out houses around the country with their enigmatic style.

The lads from the Stomping Ivories have been packing showrooms around the country, including the coveted music cruises BRAVO and ROCK THE BOAT. Their performances in BAR36 last March saw audiences on their feet, with many attending night-after-night. This time promises to be no different. Their inimitable style, showmanship and musicianship sets the Stomping Ivories apart and makes music lovers and critics alike sit up and listen!

Hugh Scott-Murray is a master pianist and singer songwriter, who has been sharing his time living and working between Nashville and Sydney. Considered one of the world’s most accomplished songwriters, he is considered a modern-day troubadour. He has co-written with the likes of Grammy-award winning artists such as Keith Urban, INXS and Tom Burlinson and calls R&B legend Lou Rawls a ‘mentor’.

Greg Agar is an Oscar-shorlisted songwriter, ARIA award-winning producer and performer, who has performed around the world – supporting the likes of Alice Cooper. From rocking with his former band Syndicate into the #1 single spot on the ARIA charts, to writing songs for film and working with The Voice Australia, he is a multitalented musician. He won an ARIA award with Sam Moran for Play Along With Sam, having produced and performed on his last four records along with Murray Sheridan. He co-wrote the feature song Hey Baby Doll with Ciaran Gribbin for the film Danny Collins (2015), which was sung by Al Pacino and earned them a shortlist for Best Original Song at the 2016 Academy Awards. He has five Top 10 hits and three feature songs from films in seven countries to his name.

Murray Sheridan is an ARIA-award winning drummer. A well-revered session musician, he has performed with the likes of The Vines and Christine Anu.

Stomping Ivories perform at BAR36 at The Reef Hotel Casino on from 8pm on Thursday 6th February and 9pm nightly across Friday 7th and Saturday 8th February. They kick it back with an earlier Sunday Session on Sunday 9th February from 7.30pm. *** Live at the Casino shows in BAR36 are non-ticketed shows.