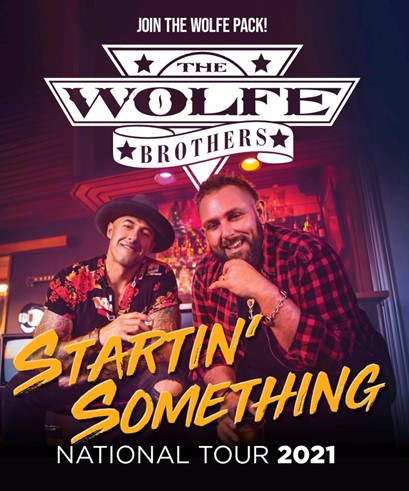 Australia’s favourite country rockers The Wolfe Brothers are heading back out on the road in 2021 with their highly anticipated Startin’ Something National Tour. After signing a new world-wide record deal with BMG in 2020, the band released two smash hit singles in the second half of the year. No Brakes and Anybody Ever went straight to #1 on the national radio charts, with No Brakes holding the #1 spot for a record breaking eight consecutive weeks. Anybody Ever is still in the charts, currently at #1 for the fifth week in a row. Not only did these two smash hit songs bring the band’s tally to an incredible 14 consecutive #1 singles over their career, but No Brakes was named #1 Song Of The Year on the KIX Network and the 88.9FM end of year Charts.

With a swag of new songs recorded during the COVID-19 pandemic lockdown in 2020, The Wolfe Brothers are planning to release their new album in the first half of this year. “We are so grateful for the response to the first two singles released from our forthcoming album,” says Tom Wolfe. “The plan is to put out one more single before we release the album and I am super excited to get this one out there.”

Nick Wolfe says the band can’t wait to share the album with fans. “We put a lot of time into this record and I think it shows in how all the new songs have come up,” he says. “Tom and I are really happy with it and can’t wait to release it and to get back out on tour with the new songs. I am sure we will test run some of the album’s songs at all the shows leading up to the release. It is always fun to give everyone a taste of what is to come and get the feedback from the fans.”

The Wolfe Brothers have built an ever-growing fanbase from the quality and energy of their live shows. After a year of being in lockdown and unable to travel, they are ready to get the party rolling again all over Australia with a new show and a bunch of new songs that will take it to the next level.

Book your tickets and join the Wolfe Pack for a great night of Aussie country rock at its best. The Wolfe Brothers special guest for the first two shows in March is two-time Golden Guitar winner Andrew Swift. Since finding his feet in the Australian country scene as a Toyota Starmaker grand-finalist in 2017, Andrew Swift as gone from strength-to-strength, his debut album Call Out For the Cavalry debuted at #1 on the ARIA Australian Country Charts.

Tickets for The Wolfe Brothers Startin’ Something tour are on sale now.