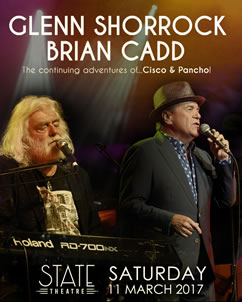 Reunited following their sell-out success The Sharky and the Caddman tour, internationally acclaimed rockers Glenn Shorrock and Brian Cadd bring their new legendary show to Sydney for one historic night only as The Continuing Adventures of Cisco and Pancho.

Since their first collaboration in 1969 as the beginnings of the Australian supergroup Axiom, the magic has never stopped between these two music powerhouses. After huge public demand for a reunited performance, the gents will be joined by legendary members of Axiom, along with talented singer/guitarists Sam See and Glyn Mason. This is an evening not to be missed as ‘Cisco and Pancho’ bring their smash hits from all their past supergroups to the State Theatre, Sydney.

There is a certain musical synergy between Glenn Shorrock and Brian Cadd and fans are certainly in for a treat at the Sydney show. “The two of us have been mates since we were little more than kids,” says Brian. “Musically we just always clicked and our voices have a most unique sound together. We’ve certainly been on all the rides ad every step and adventure has been laced with humour and fun. It happed all during the recording sessions and I’m certain will continue on the road. The status remains very much quo.”

The show collaboration was inspired by Glenn and Brian’s desire to perform together again, their united sense of humour, a keenness to share with audiences their endless talent, and to do what they do best in rock n roll, get the band back together.  “It has always been on our bucket list to perform together at the beautiful State Theatre”, said Glenn about the reunion. “We are really looking forward to performing in front of our Sydney fans,” added Brian. “There is no question it’s going to be a tonne of fun!”

Acclaimed singer-songwriter Glenn Shorrock has been a household name for over five decades since founding Australian rock group The Twilights. The success continued with supergroup Axiom, internationally acclaimed hit makers Little River Band and his prolific solo career. Glenn first discovered his voice and love of musical entertainment via a public appearance in a South Australian Lutheran church. He mimed Elvis Presley’s All Shook Up until the record player faulted and Glenn covered with his own voice, surprising himself with the skill of the sound. Since then he has gone on to create the timeless mega hits such as Reminiscing, Help Is on Its Way, Home on a Monday and Cool Change to name a few. He has not only entered the ARIA Hall of Fame as a solo artist, but as part of Little River Band as well. There is no doubt Glenn Shorrock has truly made an indelible impact on Australian music history.

Audiences will know Brian Cadd from his acclaimed hits Ginger Man, Let Go, and Little Ray of Sunshine, along with his work in the classic rock bands Axiom, his 70’s studio band The Bootleg Family Band, and with classic RnB rock band The Groop. Brian’s career began as a child prodigy aged 12 when he won a Perth talent quest and received a professional job as a pianist on television. Since then, he proceeded to take over the international music business. Recognised internationally as a songwriter, Brian has penned hits for acclaimed artists such as Joe Cocker, John Farnham, Ringo Starr and The Pointer Sisters. As an ARIA Hall of Fame member and an inductee to the Australian Songwriters Hall of Fame, Brian has enjoyed a long and varied career, and recently released his first solo album in 11 years Bulletproof to much acclaim.

Both Brian and Glenn have recently released new albums which audiences will be treated as part of this exclusive Sydney performance.  Between the new classics and the old classics from all of their previous band and solo incarnations, fans will be served a smorgasbord of timeless smash hits performed at the refined creative peak of both artists. This performance is guaranteed to transport audiences back five decades – an unforgettable night indeed.