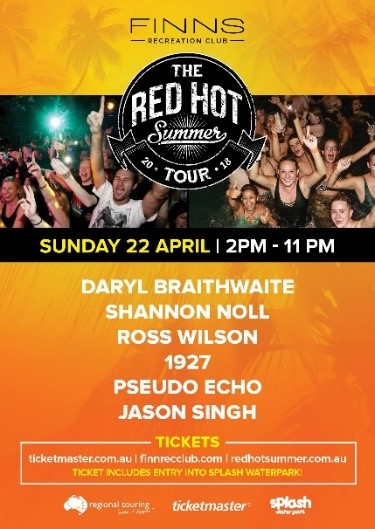 Tour promoter, Duane McDonald from Regional Touring is thrilled to be taking the tour to Bali. “It has been on the cards to take the Red Hot Summer Tour international for some time now, and the time was right to add Bali as part of the line-up for 2018,” he says. “Part of our commitment with the tour is taking music to areas that are not usually part of the general touring circuits, so music fans in regional areas – and now international hotspots – don’t miss out on seeing top-notch live music. We’ve already had feedback that music fans are going to travel over for the event. The Bali Red Hot Summer Tour is going to go off!”

A long-time supporter of the Red Hot Summer Tour, Daryl Braithwaite puts on an incredible performance and is the perfect headliner for first international foray for the tour. He is one of the most recognisable voices in the Australian music scene, and with a diverse career that has spanned decades. His anthemic version of The Horses is always a crowd-pleaser and a favourite for Red Hot Summer Tour fans. He is just about to release Days Go By – The Definitive Greatest Hits Collection showcasing all the hits throughout his career. With ten consecutive Top 10 singles in the charts, it’s fair to say that Shannon Noll has earned his place in the Aussie rock industry. The country boy first came to prominence thanks to his stand-out performances on the first series of television talent show Australian Idol. He has been nominated for several ARIA awards and has won the Best Male Artist accolade at the MTV awards three years in succession.

Ross Wilson needs no introduction – Daddy Cool himself is a legend in the Australian music scene. From his time in bands Daddy Cool and Mondo Rock, he recorded hit after hit. He has had a prolific solo career that has seen him celebrate five decades in the industry. He has been twice inducted into the ARIA Hall of Fame and is known as one of Australia’s most enduring and beloved performers. As a band, 1927 are known for their enduring hits – with a swag of classics such as That’s When I Think Of You, Compulsory Hero, To Love Me, Don’t Forget Me and If I Could, to name a few. They smashed onto the music scene with their quintuple platinum debut Ish in 1988, garnering themselves multiple ARIA awards. With countless live performances, 1927 have reached legendary status. Their inclusion on the 2018 Red Hot Summer Tour is an exciting one indeed.

Pseudo Echo are bringing all the fabulousness of the 1980s to Bali. The band are well revered for their chart-topping run which featured classic hits such as Funky Town, Don’t Go, Living In A Dream, Listening and A Beat For You. They sold in excess of one million albums worldwide and spurned a #1 single on the US Billboard Dance Charts. Pseudo Echo have celebrated seven Top 10 singles in Australia, and top charting singles in the UK, Canada, Sweden and Finland. Jason Singh is an acclaimed singer-songwriter and guitarist, most well-known for his time with multi-award winning Taxiride. During his time with the band, they had Top 5 ARIA platinum selling albums, six Top 40 ARIA singles and a plethora of rave reviews, they toured massively throughout not only Australia, but also North America, Europe and Asia. Now Jason has an impressive solo career, that has seen him have two Top 10 ARIA Club hits.

The Red Hot Summer Tour tickets are always hotly in demand and this will certainly be the case in Bali. Don’t miss your chance to be part of this special part of music festival history.

Tickets are on sale at 9am on Thursday 16th November 2017 through Ticketmaster, and Finns Recreation Club 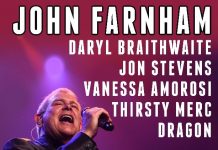 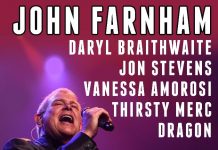