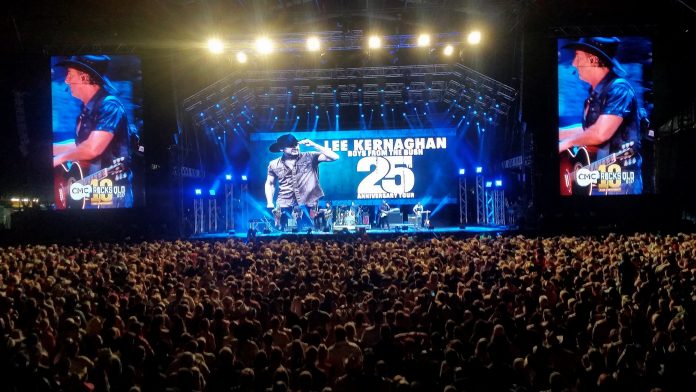 It might have been 25 years since country music legend Lee Kernaghan launched his seminal album Outback Club, but there is no slowing down for the boy from the bush. Lee is revving up for a busy couple of months as he continues his 25th Anniversary Tour, aptly titled Boys From The Bush. For fans of his music, it is no surprise that Lee Kernaghan just keeps getting better and better. He is always working on new material, tours rigorously and puts an incredible amount of energy into each show.

Getting out on the road is what Lee loves best and expanding the Boys From The Bush tour into 2018 is a win-win for Lee and fans alike. “I’m incredibly excited to be taking the 25th Anniversary Tour into another year to make sure we get to celebrate with as many fans as possible,” he says.

When Lee announced his 25th Anniversary Tour last year, the plan was to kick off at the Tamworth Country Music Festival in January and tour the country until the end of 2017. The tour was massive, selling out date after date, and the audience feedback was overwhelming – they wanted more! It sold out an incredible 29 out of 32 shows – a fitting result for a 25th anniversary – and culminated in two huge concerts at The Palms at Crown in Melbourne in November.

At the end of the tour, the demand was clear – the tour needed to be extended, reaching out to areas that missed out in 2017. When Lee announced the Boys From The Bush tour was rolling into 2018, tickets immediately started to fly out the door, and many of the shows announced are already close to selling out.

The newly announced May and June dates are destined to be huge and Lee can’t wait to celebrate his auspicious anniversary with his legion of fans. “It’s an amazing experience being on stage singing songs like Boys From The Bush, Hat Town, Flying With The King, Australian Boy and The Outback Club,” he says. “So many of those songs are not just about me, they’re about us, our people, our country, and our way of life – that’s what inspires me the most. I am really happy about being able to continue the party to areas we could not get to last year.”

The Boys From The Bush tour features Lee’s classic hits, ballads and rural anthems that have won the country legend a nationwide legion of fans that he prefers to call ‘mates’. With 38 number one hits to his credit, the show celebrates Lee’s career, and even more than that – it celebrates the fans who have been there from the beginning – and those who have joined in along the way.

Tickets to the Boys From the Bush – 25th Anniversary Tour 2018 dates are on sale now.

THE BOYS FROM THE BUSH 25TH ANNIVERSARY TOUR 2018 DATES