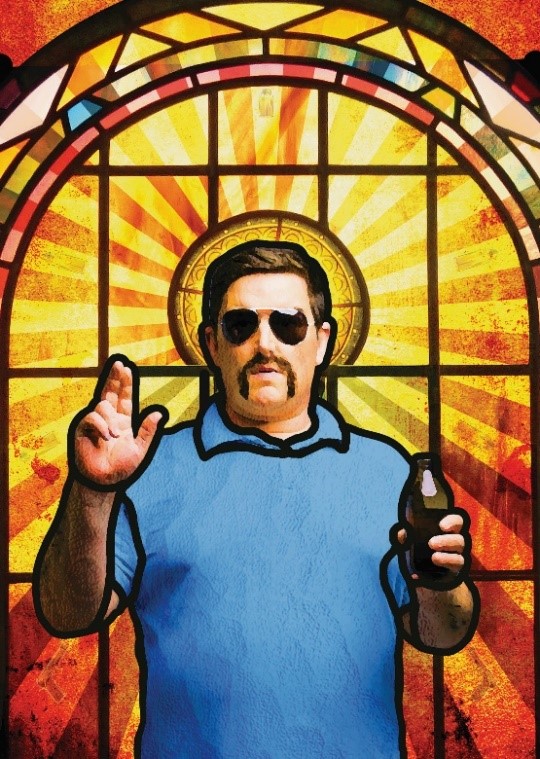 Say your prayers… Australia’s ‘Most Wanted’ comedian Heath Franklin’s CHOPPER is back and he is rising again to preach to the converted in his Bogan Jesus – The Resurrection Tour this October and November. After selling 25,000 tickets across Australia and NZ, and scoring the coveted Comic’s Choice award at the 2018 Melbourne Comedy Festival – CHOPPER is heading out on the road to spread the ‘hard’ word.

The world has had religion ever since God was in nappies, and what have we got to show for it: wars, terrorist attacks and Christian rock. It’s time religion took a hard look at itself, so CHOPPER is starting his own one, in his own image and giving hell to the almighty.

There’s a new ‘Mossiah’ in town and he’s not big on forgiveness. So, sit back, take a shot of sacrement and get ready to laugh and worship – all at the same time!

CHOPPER is a bonafide comedy and cultural icon. His phrase ‘harden the f**k up’ has entered the Aussie lexicon. He has two ARIA nominations, one Logie nomination and more than half a million ticket sales under his belt worldwide – that’s an enviable reputation. From a character on Network 10’s The Ronnie Johns Half Hour, to his debut national tour – ‘Harden the F**k, Australia’ in 2007 – to recording a live special at D-Divison in the actual Pentridge Prison and sold out shows in the UK, CHOPPER has taken no prisoners.

In 2015, CHOPPER’s television show, Chopper’s Republic of Anzakistan, debuted and spawned an Australian and New Zealand tour, playing to record sell-out crowds. CHOPPER also featured on the Triple M Network, with his regular Chopper’s Weekly Review. In 2017, he tore the roof of the Sydney Opera House in the Just For Laughs festival. Bogan Jesus is just the tip of the iceberg for what is next for this enigmatic character!

The man behind the Mo – Heath Franklin – is a multi-talented performer, actor, improvisor and writer. Aside from his exploits as CHOPPER, he has featured in the New Zealand black comedy feature film Predicament, which also starred Jemaine Clement of Flight of the Conchords. In 2017, he also featured in the mystery drama series Top Of The Lake – China Girl, alongside Elisabeth Moss. He has been a series regular on ABC’s Wednesday Night Fever, How Not to Behave and Randling, as well as appeared regularly on Spicks and Specks, Thank God You’re Here and Backseat Drivers.

If you have never seen CHOPPER live, cross yourself, say your Hail Mary’s and grab a ticket. It will be a religious experience. Be prepared to convert – thou shalt harden up and become a Chopostle. Gather round and be healed by Bogan Jesus!

Tickets for CHOPPER’S Bogan Jesus – The Resurrection Tour are on sale now.