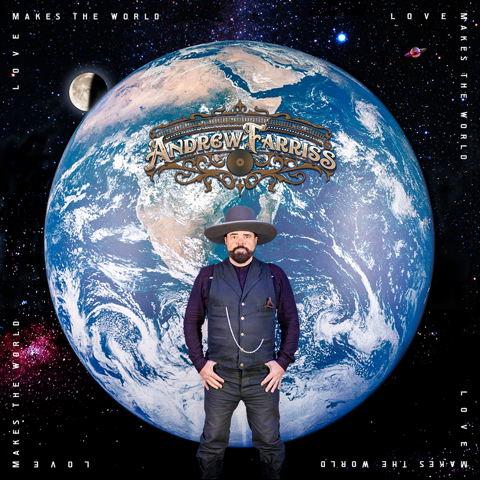 Acclaimed songwriter Andrew Farriss has been busy. With the planned release of his debut album globally at the end of this year, he was gearing up for a massive 12-months on the road. While COVID-19 might have thrown a spanner in the works of those plans and pushed back the release of his long-player into 2021, Andrew has never been the sort of man to sit idle. Knowing that music fans were looking forward to hearing his new music, he made the decision to fast-track the release of his EP – originally slated for release around 2022 – and is excited to share Love Makes The World with Australian music lovers this October.

Love Makes The World is actually a pertinent release for the current time. Its focus is on human relationships and the world around us, drilling into what is really important – the relationships between people and how we interact. Something that has been highlighted as the world takes a step back and reevaluates life during these COVID times. While the EP was planned for release after Andrew’s debut album, he had already been working on it over the past decade and felt that all the songs came together effortlessly to create its own body of work.

“When I was first creating the EP, I realised the song titles were creating their own EP,” says Andrew. “All the lyrics tie in together, and that was where I decided which songs would be the most powerful on there. I do believe that the pandemic has taught people a lot more to focus and slow down the pace of everything, appreciate time with family and look at things that matter the most. It feels like the right time to be putting this out. I am really excited because now we have the opportunity to share this music. It has ended up a bit backwards-and-forwards ironically, but it feels right.”

Andrew is well-known within music circles. This year he was honoured with a Member of the Order of Australia (AM), acknowledging his considerable contribution to music. Across his career with INXS, he has shared 50 million records, Grammy nominations and an induction into the ARIA Hall Of Fame. Outside of INXS, he is an Australian Songwriter’s Hall Of Fame inductee and has written and produced songs for a plethora of Australian and international artists.

Andrew released his debut country single, Come Midnight, in 2019, aptly demonstrating his versatility as a songwriter and endearing him to country music fans. His follow-up single, Good Momma Bad, which he debuted at Tamworth Country Music Festival this January, helped cement Andrew as a formidable presence on the country-roots scene. With the release of his Love Makes The World EP, Andrew continues exploring his country roots, incorporating elements of folk, as well as some contemporary and experimental influences, to create beautiful storytelling ballads.

The EP was recorded across Andrew’s home studio at his North West NSW farm, and the Beaird Music Group Studio in Nashville. The songs were written between Australia, Nashville and London.  The songs tackle themes such as belonging, mental health and suicide, love, conservation and the evolution of humankind. Andrew is sensitive in tackling the hard topics, from the emotions invoked from the birth of your first child, to the feelings of loss after losing his best mate to suicide, he pens emotive musical tributes that will resonate with music fans for a myriad of different reasons.

For Andrew, writing the material has been cathartic and the perfect opportunity to continue to explore different songwriting styles. The EP features co-writes with Suze DeMarchi, Ciaran Gribbin, Guy Chambers (Robbie Williams) and Jon Stevens.

“I have always seen myself as a songwriter more than anything,” he says. “Being the main songwriter in a band  as talented as INXS, with a superhuman frontman such as Michael, it was a songwriter’s dream. The lessons that I took for writing for INXS into my own career, is that maybe I can do things a little bit differently. I don’t mind not being pigeonholed. I am not interested in that; I appreciate all genres. I don’t think you have to necessarily stay in your little box and behave yourself. I think working with people outside your comfort zone is great for the future of music, that is what makes great change in music.”

Andrew Farriss releases his five-track EP Love Makes The World through BMG on Friday 2nd October 2020. The first single from the EP, All The Stars Are Mine, was released to radio on Friday 28th August.