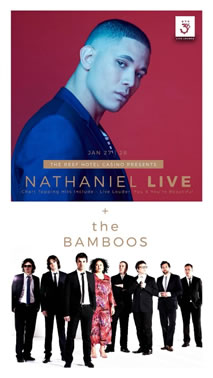 The Reef Hotel Casino is gearing up for a massive 2017, rolling out a swag of top tier entertainment in its newest live music venue, BAR36. The year will see impressive national and international touring acts, as well as incredible local favourites sharing the central Casino stage. BAR36 was officially launched last year with a huge six-nights of back-to-back local live music.

Kicking off the Live at the Casino touring program with an enviable line-up on the weekend following Australia day, the national showcase debut will see a two-handed performance from Australian prodigious singer-songwriter Nathaniel and the nationally and internationally acclaimed soul-funk band, The Bamboos. Nathaniel and The Bamboos will treat their audiences to an innovative fusion of classic and contemporary soul, revisiting crowd favourite chart toppers and fresh material in an intimate and sophisticated setting. The co-headline is the perfect introduction to the Live at the Casino 2017 program and a chance for music lovers to check-out the Far North’s newest live music haunt, BAR36. With an ethos that is music-focused, it is all about the show and ensuring music lovers have a chance to indulge their passion with some of the best acts around.

Originally from Cape Town in South Africa, rising singer-songwriter Nathaniel moved to Melbourne at an early age where he was encouraged to study and play music by his family. He achieved commercial success after placing sixth in the fourth Australian X-Factor in 2012, blowing the judges away in his audition with a beautiful rendition of John Mayer’s Gravity. In 2013 he joined Sony Music Australia and released a national top five single – You – a track that solidified his sound and presence in the Australian music industry, peaking at #4 on the ARIA Singles Chart. Transcending genres, Nathaniel has released several funk-fusion chart-topping hits, including the up-tempo number Live Louder. Nathaniel’s debut album Yours (DNA Songs/Sony Music Australia) made it to the top five of the Australian charts in 2015, aptly showcasing his audacious and mature songwriting skill. In 2013 he supported Jessica Mauboy her on the To The End of the Earth Tour, and the following year toured with Mariah Carey on her Australian tour. With a single slated for release on January 20, his appearance at BAR36 is a timely one indeed.

An Australian household name, The Bamboos are no strangers to the Far North. Formed in 2000 by legendary bandleader, producer and chief songwriter Lance Ferguson, the group have stormed their way through the Australian and international music scenes, constantly redefining soul and fusion with each performance and release. They have received five ARIA Award nominations – including Best Australian Live Act in 2012 and Best Blues and Roots Album in 2015 – and three APRA Music Award nominations, including Blues & Roots Work of the Year in 2016. Their Tim Rogers collaborative track I Got Burned came in at number #54 in the 2012 Triple J Hottest 100 and they’ve performed at some of the country’s biggest music festivals, including Falls Festival, WOMADelaide and Splendour in the Grass. The Bamboos have also collaborated with national and international vocalists like Aloe Blacc and Megan Washington. Their music is constantly evolving, embracing both classic and contemporary sounds to create an entirely new beast of soul music. They are deservedly considered one of the best live bands in the country.

Nathaniel & The Bamboos co-headline across two nights on Friday 27th and Saturday 28th January 2017 at BAR36 in The Reef Hotel Casino. Entertainment kicks off with support by FNQ favourite Rhys Tolhurst from 6pm nightly. ***

Live at the Casino shows in BAR36 are non-ticketed shows. For more information, please visit www.reefcasino.com.au