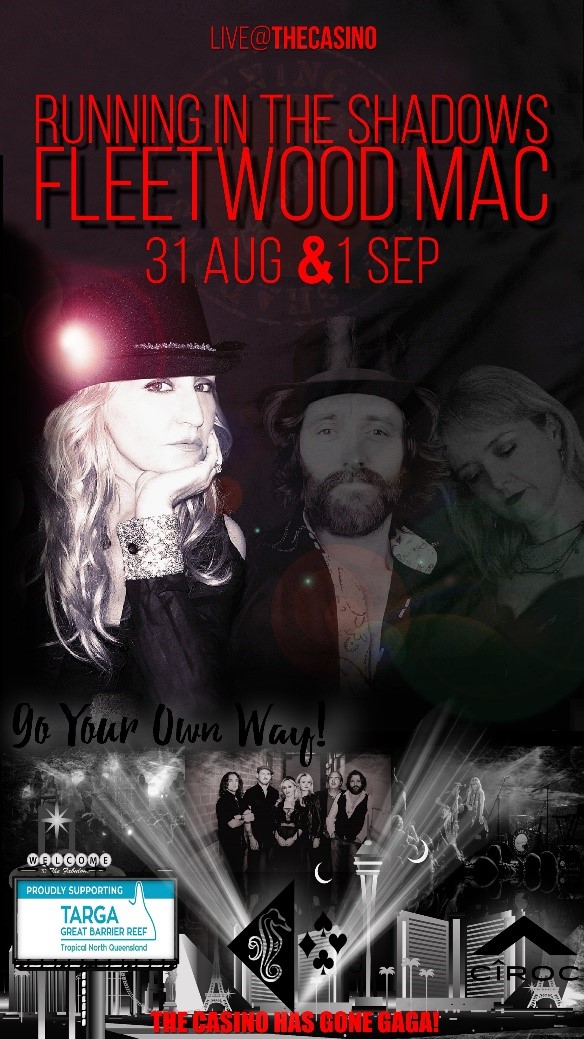 Celebrating the exciting motorsport event Targa Great Barrier Reef, The Australian Fleetwood Mac show are returning to BAR36 for a massive party weekend. It will be a huge event at The Reef Hotel Casino as more than 200 cars from around Australian and overseas vroom into the Far North for the Targa Great Barrier Reef. The inaugural event was incredible in 2018 and its return promises more of the same as motorsport fans flock to the region. The vehicles involved will battle it out across 200-kilometres, starting from Porte Cochere main entrance of the Casino, so it makes sense that spectators will want somewhere to kick back of an evening and BAR36 with the Australian Fleetwood Mac show provides the perfect option.

The spectacular show Running In The Shadows pays homage to the band exploring the extensive back catalogue, covering all the classic ballads, blues and rock songs from the iconic group’s five decade plus career. The Australian Fleetwood Mac Show are a six-piece rock band dedicated to showcasing the band’s international reign of success. The band are always on the road, in one year they performed more than 52 shows at some of the southern state’s largest venues, often selling out. Formed in 2000 by musicians Gary Stewart and Ursula Cain, the band also features lead guitarist Eddy Santacrue, bassist Jared King and drummer Andy Nicholls – many of the band members have long music careers within Australia, playing the rock circuit.

Fleetwood Mac sold more than one hundred million albums world-wide and been inducted into the Rock and Roll Hall of Fame – their songs are part of music history. They’ve appeared in numerous movies and has been covered by countless artists. They are respected far and wide for their songwriting and stage-craft. Their music has formed the soundtrack for generations.

Don’t miss when The Australian Fleetwood Mac Show as they ramp up the celebrations for Targa Great Barrier Reef at BAR36, The Reef Hotel Casino. Go Your Own Way this weekend and join in the fun!